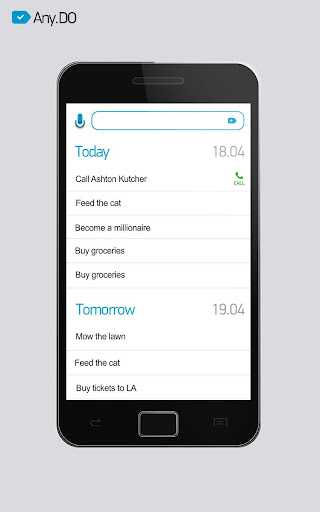 I’ll be upfront: I haven’t had an Android for a couple years now, and the main reason why I bought an Android was because I wasn’t willing to leave Verizon for AT&T to get an iPhone. Let me also say that while I prefer and love my iPhone 4S, I very hopeful for Android and excited to see where it goes. Unfortunately, when I had an Adroid I was on version 1.4, and I’d have to say the apps were exceptionally lacking in design quality. Technically, the built in controls in android were just ugly, where as in iOS a developer with no design experience can build a decent looking app because the default controls already have great–though basic–design. But we’re starting to see a shift in android land.

One app that breaks the android stereotype is Any.DO, a todo app with a minimalist UI. One of the things that sets it apart from the hord of other todo apps is that it is heavily gesture based. Pull down for a new task, pull and hold to enter a new task by voice. Changing tasks happens on the same screen with a tap. Really, this app reminds me a lot of the DayOne app for iPhone, though possibly a bit more beautiful. The biggest deal breaker for me is that it doesn’t have recurring tasks, to me the feature the differentiates todo apps from being either a list or a tool.

Check out Any.DO, and yes iPhone owners, they now have an iPhone app as well as a web app in the works.

Any.DO is a great todo app, though fairly basic. I don’t know that will actually find a place on my phone personally as it would have to push Wunderkit (my list) or OmniFocus (my tool) out of my workflow, but asthetically I find the app inspiring. Any.DO continues the trend of bringing great UI to the android platform and elsewhere.