Well it has been several months since my last post. I left with the intention to put more of my focus into my new project. I wish I could say that I was super successful in that endeavor, but sadly I was not. 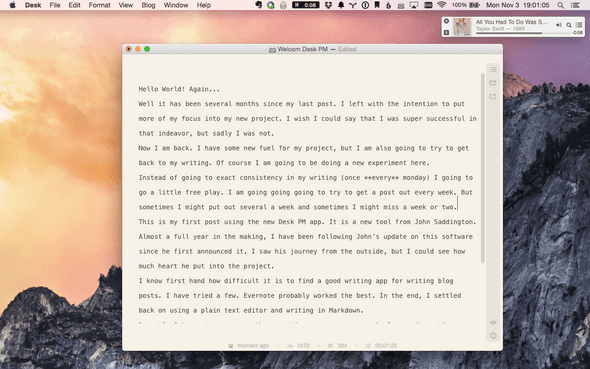 Now I am back. I have some new fuel for my project, but I am also going to try to get back to my writing. Of course I am going to be doing a new experiment here.

Instead of going to exact consistency in my writing (once every monday) I going to do some free play. I will try to get a post out every week. I might put out several a week, and sometimes I might miss a week or two. I might even start skipping putting pictures in every post as I find that to be a burden.

I am trying to remove constraints. My hope in doing this is that I will be able to share ideas more freely and get them out of my head. I recently found a new tool to help me in this.

I know first hand how difficult it is to find a good writing app for writing blog posts. I have tried a few. Evernote probably worked the best. In the end, I settled back on using a plain text editor and writing in Markdown.

This is my first post using the new Desk app. It is a new tool from John Saddington. Almost a full year in the making, I have been following John’s update on this software since he first announced it. I saw his journey from the outside, but I could see how much heart he put into the project. It is exciting to see it come to fruition.

Recently John wrote in a post that sometimes users serve technology and sometimes technology serves users. Various companies take different positions on this view. Personally I have always believed in the latter: technology exists to serve people. John has developed a technology that fullfils the latter.

I know that Desk won’t make me write more. I am still going to be facing time constraints in addition to just doing the work. But having the rights tools make it that much easier to start the job.

So hear’s the first post and the many more to follow! And please support indie developers like John… check out Desk and see if it’s right for you.